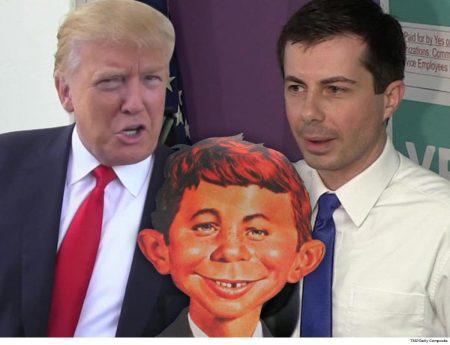 His last name is a mouthful, but Mayor Pete would rather have his mouth on his “husband” Chasten Glezman Buttigieg!  Chasten Buttigieg, the husband of presidential candidate Pete Buttigieg, said his husband’s campaign is about love.

“This campaign is love and you are loved and you matter. And we’re going to go out there and make you proud,” Chasten Buttigieg, a teacher, said in an interview .

Actually, Mayor Pete is everything a failed city administrator could possibly be!  Black and Latino’s people account for more than 40% of South Bend’s population, according to the most recent Census estimates.

There are many parts of South Bend that more resemble neighborhoods in Detroit and Baltimore… empty houses and gutted and abandoned buildings!  Houses left unattended or abandoned, quickly turn into ugly nuisances.T

Demolitions often are a city’s strongest tool, especially when housing code enforcement fails. Today it’s hard to drive down a street on South Bend’s northwest or west sides without seeing at least one empty lot where a house once stood. Some streets resemble jack-o-lanterns with wide berths of missing teeth.

Now let’s talk about the streets of South Bend! Back in the early 70’s.. it took 35 minutes to drive from the north side of South Bend to the south side..because of the two-way streets of Michigan and Main stop light city.

Here comes Mayor Pete’s plan… make ’em two way again!! Yeppers!  Five times the cost of the original one way fix..and we are back to the past, not the future!

Oh, we got “roundabouts” now.. and “open spaces” for, well, the burgeoning LGBTQ community who controls the entire downtown area of

South Bend..and it’s actually named DTSB!!  “Lipstick on a Pig” is what really happened… side streets nearly impassable with over 100,000 potholes that Mayor Pete proudly claims he fixed…..NOT!!!!

Now, a person may find lengthy articles that praise Mayor Pete’s administration, written ( of course ) by the queers and fags large community! Accompanied by crooked city officials who suck millions out of the city coffers for their own aims and pockets!

Hey… here is the “law enforcement” latest!!   his “first serious mistake as mayor” was firing the first black man to head the city’s police force!

Federal investigators told Buttigieg, then a 29-year-old newly elected mayor, that they were investigating Boykins in a possible wiretapping scandal.

Buttigieg kept the FBI information to himself, but two months later asked for Boykins’s resignation.

Members of the black community were also unhappy and Boykins later sued Buttigieg and chief of staff Mike Schmuhl for alleged “racial animus.” Boykins sued the city for millions but actually won $575,000.

Harvard University broadcast to the world their conclusion that the populace here in South Bend is unhappy.

Not just unhappy, but really unhappy.

As they put it, South Bend is the third most unhappy city in the entire nation.

The Harvard study was based on a large and diverse number of people on the CDC’s Behavioral Risk Factor Surveillance System, and the results are adjusted for age, sex, race, income, and other factors. The “permacloud” that covers South Bend 230 days a year may have something to do with unfavorable ranking…but at the end of the day.. the city just sucks!

Mayor Pete, his husband, his lifestyle, his communist, socialist professor Father… all contribute to his allure to the Democrats as the new darling of the Party!